This recording and a version of this article were published on Ritual Well (USA) as ‘Arise, my love‘.

I wrote this song in the same week that I wrote Libavtini achoti chalah. Both songs draw on verses and phrases from Song of Songs. The purpose for writing was very clear. Two friends of mine, Ella and Natasha, were getting married, and I wanted to offer them music for their wedding based on traditional Biblical text. The challenge was that there was, of course, no explicit Biblical narrative of a same-sex marriage.

It is certainly possible to construct a 21st century reading of the story of David and Jonathan as an example of a positive relationship between two male lover-partners that is implicitly accepted and celebrated by the writer(s). However, there are no verses in that story that seem to lend themselves to become song lyrics. It is harder to find a Biblical narrative that might reflect a lover-partner relationship between two women, but some modern commentators have suggested that after the death of her husband, Ruth entered into such a relationship with Naomi. Ruth’s beautiful words pledging allegiance have been used for both heterosexual and same-sex wedding vows: “Don’t urge me to leave you or to turn back from you. Where you go I will go, and where you stay I will stay. Your people will be my people and your God my God.” (My musical setting of this can be found at: Your People Will Be My People) But might it be possible to go further, to find traditional texts that explicitly celebrate covenantal, lover relationship between women?

Texts from the ‘Song of Songs’ (Shir Hashirim) have often been used for alternative wedding vows, and also for wedding songs. However, writing a song for two women, I did not want to use the references, however beautiful and emotionally resonant, to dodi ‘my beloved’, because this is a male lover. Ancient Hebrew does not have a female version of the word, and its modern equivalent, dodati means ‘my aunt’! Some modern ceremonies retain dodi to refer even to women, in order to retain the ancient words and sounds. But the male-gendered language does not seem to me to honour modern perspectives, and possibly would hamper the evolution of Judaism’s communal prayer life and ritual. Fortunately, a close reading of ‘Song of Songs’ yielded verses and phrases (2:10, 2:11, 2:12, 4:1, 5:2) that I was able to string together as a lyric, indeed as a narrative, that exclusively refers to a female partner, so the original language could be left intact. (This song can, of course, also be sung at a heterosexual wedding, specifically for the bride.)

The first verse celebrates the vitality that comes from encountering beauty in another, and the new relationship that offers itself. The Midrash Rabbah (commentaries assembled over eight to ten centuries) on ‘Song of Songs’ suggests that the lover is called to ‘arise’ as Abraham was when he had to start a new life (Shir Hashirim Rabbah 2:27, Gen 12:1); the lover is also called to ‘come away’ (l’chi lach) like Jacob (Shir Hashirim Rabbah 2:27, Gen 28:7) who had to leave his parents’ home to get married. This is a defining moment, as Rabbi Joseph Soloveitchik explains:

“Lecha1 … speaks of action that is not to be repeated, but is final and ultimate. If God wanted Abraham merely to visit the land of Canaan, He would have said only lech [not lech lecha]. But God meant for him to leave the past, to blot out his memory… In the Song of Songs, the Shulammite keeps using different excuses to not join her beloved. Finally, he knocks on her door and says, “Rise up – kumi lach – my love and fair one.” No more excuses, no more apologies. The lecha emphasizes the finality of the action. In the Akeida story [the binding of Isaac], God tells Abraham, “Take now your son, your only son, Isaac, whom you love, and go, lech lecha, to the land of Moriah” (Gen. 22:2). Lecha denotes significance and relevance: the act which is to be done is of great and terrific importance.”2

In the second verse, the lovers look deeply into each other’s eyes. I imagine them each wearing a wedding veil, and addressing one another as they commit to the covenant of life partnership. The midrash in Shir Hashirim Rabbah 4:2 speaks warmly of the dove’s qualities, including the point that “the dove, from the time that she recognises her mate, never changes her mate for another” – a fitting text for a wedding!

The third verse represents what comes after the wedding, the marriage itself – the continuing revelation of blossoming relationship, where the partners continue to open to one another. Shir Hashirim Rabbah 5:3 makes two points about tamati (‘my perfect/pure one’), both a play on language: with a change of vowels, it can also mean ‘wholly devoted’, and a ‘twin’. About the latter, Rabbi Jannai says, “I am not greater than she nor is she greater than I am”, truly a relationship of equals. In this third verse, the couple can be thought of as writing the ‘song’ of their life together. And, significantly, the partners are ‘sisters’, which fits well with the theme of a wedding for two women. 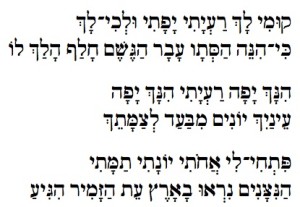 [1] Lech lecha is the male equivalent of l’chi lach.

For other wedding music, see: